Andrew Duncomb, the Black conservative journalist who was stabbed and nearly killed at a recent protest in Portland, described the immediate chaos after realizing he had been shanked and had no idea if he was “bleeding out.”

Duncomb told Fox News on Thursday that he knew immediately that he had been stabbed after he confronted a man he said was stalking him and some pals on Saturday at around 2:30 a.m. in downtown Portland.

Portland has seen 62 consecutive nights of protests and demonstrations stemming from the May 25 death of George Floyd in Minneapolis police custody. Duncomb told the Oregonian newspaper that he was there to document the scene on the ground and prove that it was not “the feds creating the problems.” 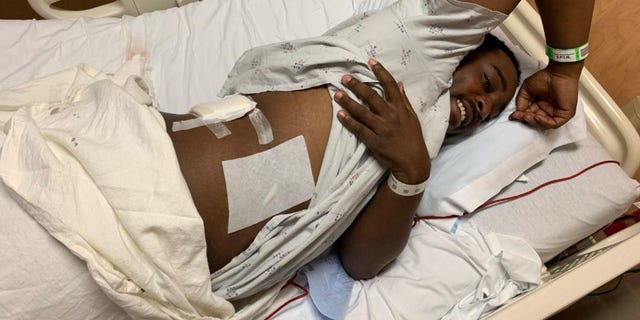 Andrew Duncomb suffered a stab wound after attending a protest in Portland.

He said he knew he was injured and was treated by “Antifa medics” at the scene. These “medics” dress in red, long-sleeve shirts. Seattle’s CHOP also reportedly had its own security and medical response teams.

The paper, citing court records, reported that Blake David Hampe, 43, was arrested at the scene. Hampe allegedly told police that Duncomb tried to choke him, the report said. He faces charges of second-degree assault and is still in jail, the report said.

Duncomb said that his attacker was confronted by protesters at the scene.

He said he is recovering from the injury that was 2 inches from his spine and 4-5 inches deep. He said medical bills are stacking up and has a Fundly page.

He was released from the hospital. He said he plans to attend Hampe’s first court appearance on Friday.