Several items that included a sledgehammer, pipe and a chain with a lock were found Thursday during the cleanup of downtown Portland, Ore., parks near where protests have raged for weeks, police officials said Thursday.

The maintenance of Chapman and Lownsdale squares — which sit adjacent to one another — was conducted following a night of confrontation between authorities and protesters at the nearby Mark O. Hatfield U.S. Courthouse, the Portland Police Bureau said. 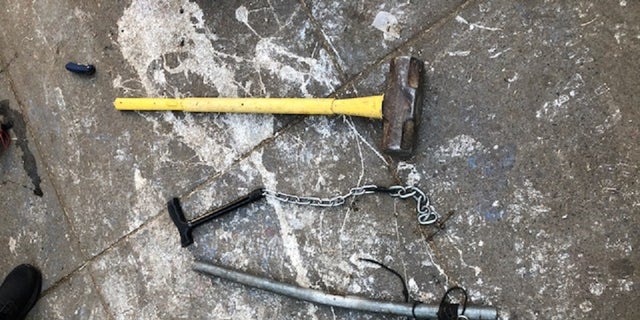 Officers gave people inside 10 minutes to clear the area and no arrests were initially made at the time. Aside from the weapons, other items recovered at the parks included body armor, helmets, a shield and leaf blowers.

“There were shocking amounts of refuse in the parks as well,” a police news release said.

At one point, the building was targeted with bottles, gas canisters and other objects. In addition to the protest Wednesday night, the city experienced multiple shootings and reports of people being assaulted nearby by a group with a pellet gun.

Two minors were taken into custody on suspicion for the assaults.