Estimates suggest drug overdoses on the rise since coronavirus outbreak

ORLANDO, Fla. – Adam Platt first came to Fresh Start Ministries of Central Florida in March. His addiction to opioids began early in his life, and it’s been a long road to recovery ever since.

“My mother was sick and then she died when I was 15,” Platt told Fox News. “I kind of held a lot of resentment towards God and towards life and towards people, so I started using drugs.” 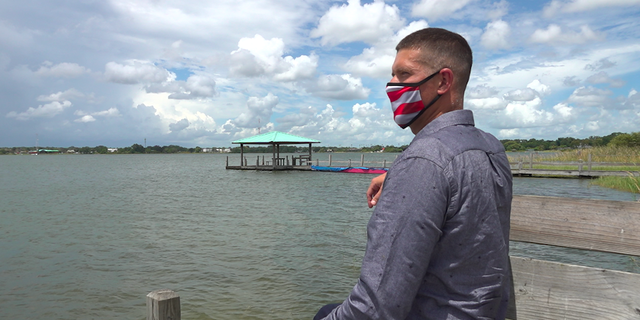 Adam Platt’s battle with opioids began in his teenage years. In March, he came to Fresh Start Ministries of Central Florida. Looking back, he believes if he was completely in the outside world amid the pandemic, his fight against addiction would be much more difficult (Robert Sherman, Fox News).

While Platt admits he still has more to learn, he feels much more in control of his life now than he did just months ago.

But Platt is not the only one in this fight. The Substance Abuse and Mental Health Services Administration’s most recent survey results from 2018 found that more than 20 million people needed substance use treatment in the U.S. The Centers for Disease Control and Prevention (CDC) was able to report some progress that same year, as drug overdose deaths dropped by about 4 percent.

2020, however, is shaping up to be worse according to experts. As millions of Americans remain unemployed and millions more have spent the past few months quarantining and isolating due to coronavirus, places like Fresh Start Ministries of Central Florida, located in Orlando, have seen more instances of drug abuse and relapses firsthand.

IHME INCREASES US CORONAVIRUS DEATH TOLL PROJECTION TO 230,000 BY NOVEMBER

Executive Director and co-founder Joe Cordovano says turning to drugs is a common escape mechanism from the stresses of life that have been amplified by the pandemic.

“It’s as if two epidemics have collided,” Cordovano told Fox News. “You lump all those [sources of stress] together, then you shoot up, smoke, you do whatever it is you do, and the world goes away for a little while.”

A bottle with a hydrocodone (the generic name for drug sold under other names by various pharmaceutical companies) label and hydrocodone tablets spilling out isolated on white background. Hydrocodone is a popular prescription semi-synthetic opioid that is used to treat moderate to severe pain. Hydrocodone is said to be one of the most common recreational prescription drugs in America.

Nationwide, it’s a similar story. While it will still be some time before the final tabulations can be made, Dr. Nora Volkow, Director of the National Institute on Drug Abuse, tells Fox News that she estimates drug overdoses have increased by anywhere from 30 to 40 percent since the initial outbreak.

Volkow said that as social beings, isolation can be very dangerous for people — especially those who are struggling with addiction and the stresses of the world’s current state of affairs.

DR NICOLE SAPHIER: COVID-19 — FROM GOGGLES TO TESTING, THIS IS WHAT WE NEED TO DO NEXT TO BEAT CORONAVIRUS

“Social isolation is one of the factors that increases the risk for someone to take drugs,” said Volkow. “If you’re trying to achieve recovery, social isolation will increase the likelihood that you will relapse. And this is because we rely so much on others for our sense of wellbeing.”

In the interim, Volkow said close friends and family members can help the situation by making it a point to reach out to each other and keep them close, even if virtually.

“Reach out for help. It’s ok to seek help for depression. If you have suicidal thinking. If you have these strong strong cravings for this addiction that you are battling and you think you are going to lose [that battle]. Seek help.”

But the pandemic has created a second problem in the fight against addiction: Some who need help are now hesitant to get it.

“We’re seeing a lot of people that do want help not get the help because they’re afraid of getting coronavirus,” said Cordovano. Since the pandemic, he says the phone continues to ring near-incessantly in search of treatment, but getting people to commit due to living alongside others has proven difficult.

Fresh Start Ministries of Central Florida is normally booked full with those seeking treatment for addiction. But, for the first time in years, they have vacancies in their program. The Executive Director says it’s proving difficult to get those who need help to commit to the program for fear of contracting COVID-19 (Robert Sherman, Fox News).

As an example, Cordovano said this is the first time in years where Fresh Start Ministries of Central Florida has had vacancies in its program. Typically, he claimed the center draws people from across the country and are booked full with a lengthy waiting list.

When it comes to helping someone battling addiction, he explained that virtual chats and treatments are not as effective.

“The bottom line is we as recovering addicts need to have the peer pressure of actually talking to somebody and them holding us accountable,” said Cordovano. “And it’s not the same when I’m talking to them on a camera and saying ‘hey, you’ve gotta do the right thing.’”

In March, Platt was not concerned about how the stresses of the world would impact his battle with addiction. He enrolled anyways, but now is thankful to be in treatment as opposed to completely in the outside world.

“If I was out there it would be a lot tougher with COVID,” said Platt. “The relationships I do have here are helping me get through the hard times.”