Florida wildlife officials announced last week that 5,000 invasive Burmese pythons have been removed from the delicate Everglades ecosystem since setting up elimination programs three years ago.

Teams with Florida Fish and Wildlife Conservation Commission (FWC) and South Florida Water Management District (SFWMD) worked together to reach the milestone effort, the agencies said in a statement on Tuesday.

5 OF THE MOST DESTRUCTIVE INVASIVE SPECIES IN THE US

SFWMD Governing Board Member “Alligator Ron” Bergeron called the milestone “another win for the Everglades.”

Native to Southeast Asia, the Burmese python is one of the largest snakes in the world, growing to over 20 feet long. The apex predator has caused a severe decline in mammal populations in the Everglades, including endangered species. The snakes feed on animals like birds and rabbits, and take away those food sources from native wildlife like panthers, bobcats and alligators.

“We can’t win the battle alone,” FWC Commissioner Rodney Barreto said of the joint effort between the agencies, experienced python hunters hired by the state and the ongoing support from Gov. Ron DeSantis. “It’s one team, one mission.” 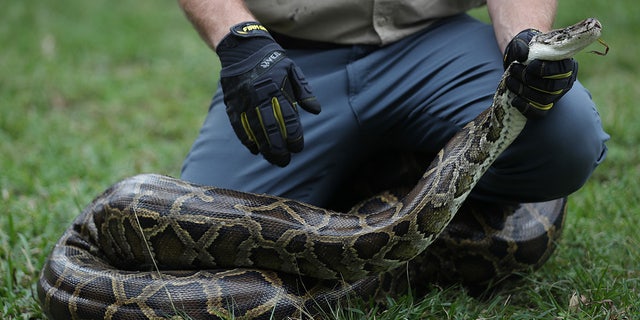 Robert Edman, with the Florida Fish and Wildlife Conservation Commission, gives a python-catching demonstration before potential snake hunters at the start of the Python Bowl 2020 on January 10, 2020 in Sunrise, Florida. (Photo by Joe Raedle/Getty Images)

The state has enlisted python hunters to cull the invasive species from the Everglades. It doubled its ranks of experienced hunters to 50 late last year, the South Florida Sun-Sentinel reported at the time, paying an hourly rate of $8.65. The SFWMD also offered bonus bounties based on the length of the snake or for finding a nest of eggs.

The FWC’s Python Action Team has removed more than 1,700 snakes since early 2017, an agency spokeswoman told the Tampa Bay Times, while the SFWMD’s Python Elimination Program has captured nearly 3,400.

The snake began appearing in the Everglades more than 20 years ago when the reptiles were imported as pets, according to the U.S. Department of Agriculture (USDA). Many were believed to have escaped or were released into the wild.