Thousands of people in Southern California are under evacuation orders on Sunday after a wildfire exploded in size, destroying at least one home.

The Riverside County Fire Department said the blaze, known as the Apple Fire, has scorched about 20,516 acres and is at zero percent containment as it burns in an area straddling Riverside and San Bernardino counties in the mountains east of Los Angeles.

The blaze grew by more than 13,000 acres in less than a day as it burned through dry brush and timber.

A man who has lived in the area near San Bernardino National Forest told KTLA on Saturday that conditions were prime for a destructive blaze. 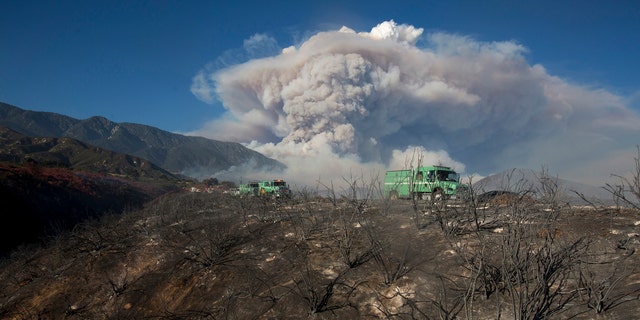 Some rises behind an area burned by a brush fire at the Apple Fire in Cherry Valley, Calif., Saturday, Aug. 1, 2020. (AP Photo/Ringo H.W. Chiu)

“Even though we’ve had fires in the past, it’s been a number of years,” the man, who only gave his first name, Bill, told KTLA. “So there’s a lot of heavy fuel out there. It’s dry, it was 106 degrees yesterday — perfect conditions for something to really get going, and that’s what happened.”

No injuries have been reported, but some 8,000 people are under evacuation orders in mountain, canyon and foothill neighborhoods.

The blaze began as two adjacent fires reported Friday evening in Cherry Valley, an unincorporated area near the city of Beaumont about 85 miles east of downtown Los Angeles.

The cause is under investigation.

Flames on Saturday leaped along brushy ridge tops and came close to homes while firefighters attacked it from the ground and air.

One home and two outbuildings were destroyed, Cal Fire said.

A huge smoke plume was visible for miles around and contributed to poor air quality for the region. Air quality will be unhealthy through Sunday night in areas to the east due to the massive blaze, FOX11 reported.

Videos posted to social media showed the extent of the smoke in the area.

The National Weather Service (NWS) said Sunday that smoke from the blaze was reaching as far east as Phoenix.

Conditions in the area are not expected to improve anytime soon.

Temperatures reached 105 degrees Fahrenheit on Saturday in nearby Palm Springs.

The NWS said “dangerously hot conditions” were expected to continue because of high pressure over much of Southern California.