California man recounts harrowing escape from wildfire: 'I put the pedal to the floor'

A California man says he had to put the “pedal to the floor” in order for his vehicle to break through a wall of flames threatening to consume the area around his home.

Jack Thompson, who lives near the Whitewater Preserve outside of Palm Springs, is now speaking out about his harrowing escape from the Apple Fire on Sunday. The blaze, as of midday Tuesday, has burned nearly 27,000 acres and is only 15% contained, Cal Fire says.

Thompson told the Los Angeles Times that his ordeal began when he noticed a “brand new fire” growing in his backyard, prompting him to call out to his wife to “grab the dog and the packed suitcases.” 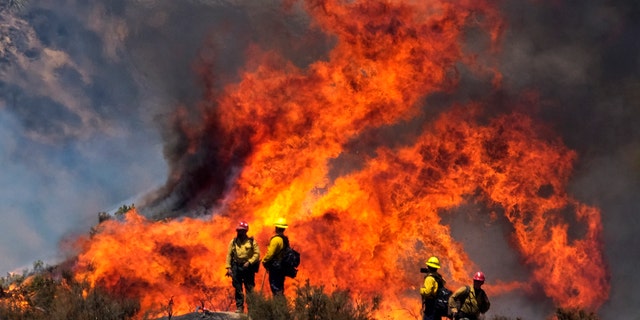 APPLE FIRE IN CALIFORNIA WAS SPARKED BY VEHICLE MALFUNCTION

The couple then raced down a one-way-in, one-way-out road in their Toyota 4Runner – until they reached a point where a wall of flames and smoke was directly ahead, according to the newspaper.

“My wife grabbed hold of my right hand, gave it a squeeze and wondered aloud, ‘Jack?’” Thompson told the Los Angeles Times. “’We’re going to be all right,’ I said, then I put the pedal to the floor. We broke through the flames and saw a clear path ahead.”

After emerging at the end of the road – which connects to Interstate 10 – Thompson says he flagged down a firetruck to give responding firefighters “information about the locations of fire hydrants and water resources.”

“I told my wife that I was going back to join the firefighters,” he added. “She said, ‘Darling, I’ll be right here waiting for you.’”

Smoke from the Apple Fire can be seen in this satellite image from NASA. (NASA/GOES-East)

Several evacuations are in place in both Riverside and San Bernardino counties as a result of the fire, impacting thousands of residents. At one point, sweeping orders affected some 8,000 people.

The Los Angeles Times adds that 2,300 fire personnel are working to extinguish the blaze, which, according to officials, was ignited Friday by “a diesel-fueled vehicle emitting burning carbon from the exhaust system.”

The fire has destroyed at least four homes and two outbuildings while threatening dozens more, fire officials said. And smoke from it has drifted over western Arizona and the Phoenix area.

Fox News’ Travis Fedschun and the Associated Press contributed to this report.