At least five people were killed when Tropical Storm Isaias spawned tornadoes, downed trees and dumped flooding rains as it roared up the East Coast on Tuesday.

A Pennsylvania woman died when she attempted to drive her car into high water and was swept into a creek, local newspaper The Morning Call reported.

As of 8 p.m. EDT, the U.S. National Hurricane Center reported maximum sustained winds of 50 mph, though they reached as high as 65 mph earlier Tuesday. It was moving north-northeast across Vermont at 40 mph.

“Strong and damaging winds will continue to spread northward across the New York City metropolitan area, including eastern Long Island and southern New England, that could knock down trees and power lines,” the hurricane center said.

More than 12 hours after coming ashore in North Carolina, the storm was causing destruction hundreds of miles north into the New York City metro area.

Two people died and about 20 were injured after one of the tornadoes spawned by the storm “totally demolished” several mobile homes in Windsor, North Carolina, according to Juan Vaughan II, county manager for Bertie County.

“We’re still in active searches going on right now,” Vaughan said. “We really want to make sure everyone is found safe as soon as possible.”

An aerial shot by WRAL-TV showed fields of debris where rescue workers in brightly colored shirts picked through splintered boards and other wreckage. Nearby, a vehicle was flipped onto its roof, its tires pointed up in the air.

“It doesn’t look real. It looks like something on TV. Nothing is there,” Bertie County Sheriff John Holley told reporters. “All my officers are down there at this time. Pretty much the entire trailer park is gone.”

Another possible tornado was reported in the Philadelphia area, where the parking lot of the Doylestown Hospital was littered with cars.

Nearby a large chunk of the roof of a daycare center was torn off by the wind gusts, FOX29 reported. The building was reportedly evacuated and no injuries were sustained.

Forecasters expected the storm to hold its strength and spin-off damaging winds on a path into New England on Tuesday night.

According to power-outage tracking website poweroutage.us, more than 2.2 million electric customers were without power along the East Coast, including 1.3 million in New Jersey.

Crews in the Garden State were staging to restore service once the worst of the weather had passed. 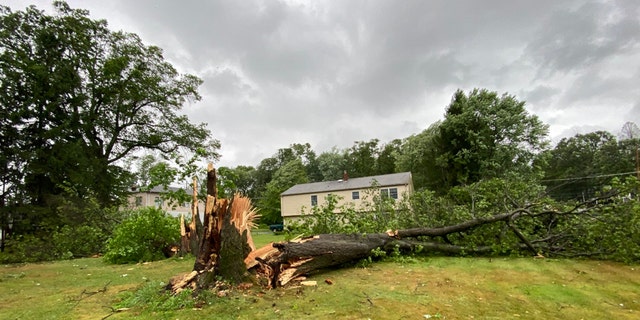 Tropical storm winds extend outward up to 140 miles from the center of the storm, with gusts up to 72 mph reported in New York Harbor. New York’s JFK Airport recorded a wind gust of 70 mph, and area commuter trains had service suspended due to the storm.

The New York City Fire Department confirmed that one person died in Queens after Isaias hit the city. The individual, who has yet to be identified, was killed when a tree fell on a car in the Briarwood section of Queens, CBS New York reported.

A woman claims out of a stranded car during Tropical Storm Isaias, Aug. 4, in Philadelphia. (AP Photo/Matt Slocum)

As the rains grew stronger and steadier in the Philadelphia area Tuesday, emergency responders rescued a few people trapped in vehicles when roads suddenly became flooded and mostly impassable.

A man pushes a car through a flooded street during Tropical Storm Isaias, Aug. 4, in Philadelphia. (AP Photo/Matt Slocum)

Parts of southern Maryland and the eastern shore saw some of the worst impacts from the storm. Forecasters warned of “life-threatening” flooding in the Baltimore and Washington region.

Authorities told FOX5 that one person was killed when a tree landed on a vehicle near Mechanicsville, Maryland., during the height of the storm.

As Isaias toggled between tropical storm and hurricane, it killed two people in the Caribbean and trashed the Bahamas before brushing past Florida.

Most of the significant damage seemed to be east and north of where the hurricane’s eye struck land.

Forecasters had clear warnings earlier, as Isaias approached land, for a life-threatening storm surge along the coasts of North and South Carolina.

Nevertheless, some veterans of earlier storms thought their areas would be spared.

Royce Potter, a fifth-generation seafood purveyor and owner of Potter’s Seafood in Southport, told the Associated Press he rode out the storm on a boat docked near his business, which was damaged by the wind and water.

“They got this wrong,” Potter said, visibly shaken. “I’ve ridden storms out here for years.”

Fox News’ Tamara Gitt and The Associated Press contributed to this report.