President Trump raised questions about the cause of Jeffrey Epstein’s death while defending his recent remarks wishing the disgraced financier’s alleged associate well in the wake of criminal charges, according to a recent report.

Trump was interviewed by Axios’ Jonathan Swan for a segment that aired Monday night on “Axios on HBO” when he was asked why he had offered Ghislaine Maxwell his well-wishes.

As Swan explains that Maxwell had been arrested in connection with child sex trafficking allegations, Trump responds, “I don’t know that,” to which Swan replies: “She has. She’s been arrested for that.”

The president then adds: “Her friend or boyfriend was either killed or committed suicide in jail. She’s now in jail. Yeah, I wish her well, I’d wish you well. I’d wish a lot of people well. Good luck!”

On Aug. 10, 2019, Epstein was found in his cell at a Manhattan, N.Y. federal jail hanging from strips of orange bed sheets.

New York City’s Office of the Chief Medical Examiner determined Epstein had committed suicide by hanging, but some, including longtime pathologist Dr. Michael Baden, have disputed the determination.

Baden, who previously served as the city’s chief medical examiner, was enlisted for help by Epstein’s family, and told Fox News in January he found “greater evidence of homicide than suicide.”

Nearly a year later, Maxwell was arrested at the beginning of July for allegedly recruiting teenage girls for Epstein to sexually abuse decades ago. According to an indictment unsealed at the time, the now-48-year-old groomed Epstein’s victims to handle the sexual abuse and was at times present when it happened. 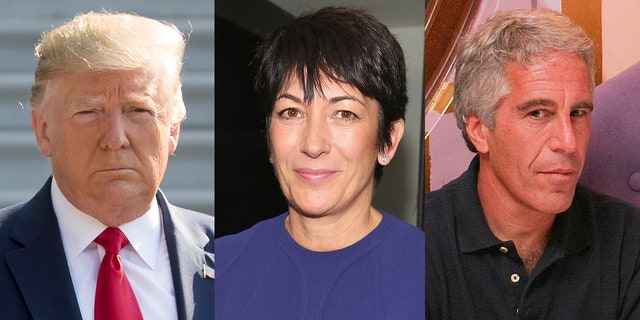 EPSTEIN ABUSE VICTIMS’ IDS BLOCKED FROM BEING MADE PUBLIC: JUDGE

Maxwell was denied bail shortly after her arrest and is awaiting trial in a federal jail in Brooklyn.

When asked about Maxwell at a press conference on July 21, Trump said, “I just wish her well, frankly.

During Tuesday’s Axios segment, Trump further added that people are “still trying to figure out” how Epstein died.

At the time of Epstein’s death, he was awaiting trial on charges related to the sex trafficking of minors. He previously pleaded guilty in 2008  to state charges in Florida of solicitation of prostitution involving a minor and another similar prostitution charge.

Epstein associated over the years with many high-profile figures in politics and business, including Trump, former President Bill Clinton, Prince Andrew of Britain, and the retail mogul Leslie Wexner.

Fox News’ Marta Dhanis and The Associated Press contributed to this report.