Ervin Julian, a World War II veteran from Arizona who became a viral sensation after he was carried to his seat during a rally for President Trump in Phoenix last February, has died, according to a report.

Julian died last Thursday, his son Steven Julian told FOX 10 of Phoenix. A video posted on Twitter had shown two men carrying the 100-year-old vet down a flight of stairs at the Arizona Veterans Memorial Coliseum on Feb. 19, as the crowd chanted “U-S-A! U-S-A!” in the background.

“What a life! We’re losing so many of our amazing WWII heroes,” wrote FOX 10’s Kari Lake. “Each one appreciated for their contribution to this country. Rest In Peace, sir.”

After the rally, Steven Julian — who revealed he had previously worked on Trump’s 2016 presidential campaign — told “Fox & Friends” host Steve Doocy he just wanted to do something special for his father.

“So, I was going to go after I got the credentials to get VIP seating, and that’s … where it all started,” he told Doocy.

President Trump later recognized the centenarian at the event, saying: “He might be even hotter than Trump right now, I have to say.

“I want to thank you, really. That’s a great honor and thank you for the great job you’ve done, an American patriot, thank you very much,” Trump continued. 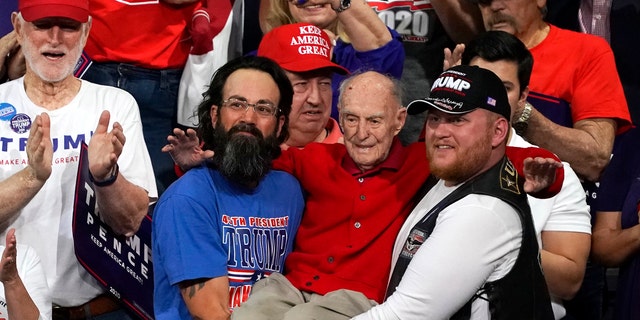 “That was unbelievable,” Steven Julian told Fox News at the time. “That’s a big compliment coming from the president of the United States to my father.”

On Wednesday, members of Julian’s family remembered the veteran, including Steven Julian, who called his dad “a great hero.”

“My father was a great man. I mean, as Trump said, he was a world-class celebrity and a great hero,” he told the station.

Steven Julian added that dementia caused his father to not fully understand how the world had changed during the coronavirus pandemic. Still, he was able to bring his father home from assisted living and said their time together over the last few months was special.

His family plans to hold memorial services for Julian in Surprise, Ariz., a Phoenix suburb, according to FOX 10. To honor Julian, a Celebration of Life will be held Oct. 25, with a motorcade set to take place the following day, his son said.

The veteran will be buried at the National Memorial Cemetery of Arizona.