A “Back the Blue” mural painted outside Tampa Police Department headquarters was defaced Tuesday night with red paint and black tar.

City officials said security footage captured a person dressed in all black getting out of a vehicle at about 10 p.m. and pouring what appeared to be tar on parts of the mural, Tampa’s Fox 13 reported.

After midnight, a second person spray-painted “F— 12” (an anti-police slogan) and “BLM” on a roll-up utility door of police headquarters, according to the station.

The mural was organized by the online groups Back the Blue Florida and Community Patriots Tampa. 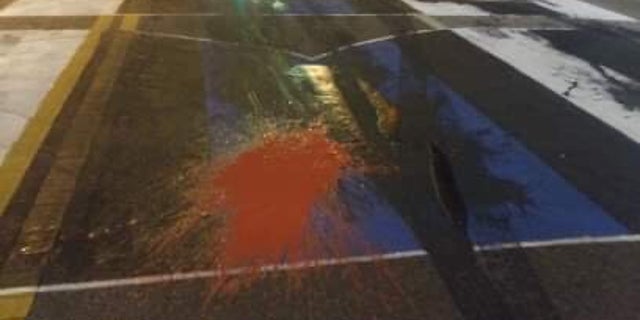 A pro-police mural outside Tampa police headquarters was defaced Tuesday night.  (Back the Blue Florida)

The defacement came as no surprise given the level of hostility against law enforcement in recent months, Back the Blue Florida said in a statement released to Fox News.

“The area has been held hostage under a reign of mob violence since early 2020 and police morale had plummeted,” the group’s statement said. “Police officers have been victimized, attacked, and even ambushed but the tide is turning.”

Tampa Mayor Jane Castor said earlier this week that the groups did not get proper authorization to paint the mural. But people, including a source within law enforcement who spoke on the condition of anonymity, told Fox News that Castor had signed off on the mural.

Kelli Campbell, an organizer of “Back the Blue Florida,” told Fox 13 that Castor had given verbal approval “in front of hundreds of law enforcement officers.”

The mayor’s office did not immediately respond to Fox News’ request for comment.

On Wednesday, volunteers came out to repaint the mural, but they were reportedly stopped early for not having a permit.

Chief Brian Dugan later released a statement that said murals painted in the city roadway need to be approved.

“We will continue to work with any group to make sure their First Amendment rights are heard,” Dugan said.

Meanwhile, Crime Stoppers of Tampa Bay is offering a reward of up to $3,000 for information that leads to an arrest.