A New Jersey gas station ignited on Tuesday morning after a vehicle collision caused a car to crash into a pair of gas pumps, setting them ablaze, according to authorities.

The crash occurred as tropical storm Isaias touched down in the state. Video released by police showed a car traveling along Route 1 in North Brunswick when it attempted to turn into the gas station. A red vehicle then sideswiped the turning car before flipping on its side and crashing into the gas pumps.

“We are fortunate to say that there were no life threatening injuries reported,” the North Brunswick Police Department wrote on Facebook. “Just a reminder to please use caution while driving, especially days like today.”

Isaias battered New Jersey on Tuesday with heavy rains and winds, causing at least two tornadoes and downing power lines across the Shore area, according to NJ.com. Driving conditions were impacted throughout the state.

New Jersey Gov. Phil Murphy declared a statewide state of emergency that begin on of 5 a.m. Tuesday as the storm was projected to impact the region. He advised limiting travel on the roads “unless absolutely necessary.”

“Do not be on the roads unless absolutely necessary If you must drive, take it slow, use caution, and leave extra time to get to your destination,” Murphy wrote on Twitter. 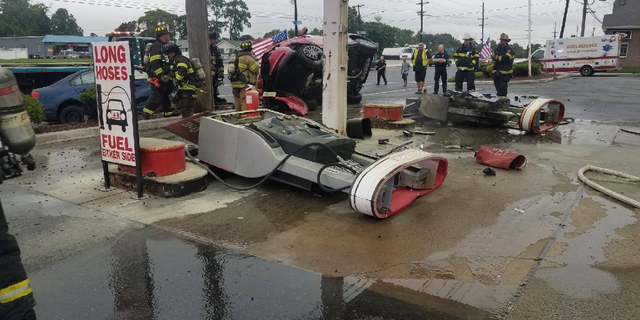 Authorities have yet to release additional details on the crash and it wasn’t clear if a court summons was issued, according to the paper.

Officers responded to the scene after receiving multiple 911 calls reporting the crash, police said. They were joined by emergency rescue and fire crews.