Hundreds of protesters marched to the office building on North Lombard Street near North Campbell Avenue and arrived at approximately 9:45 p.m., at which point police said they blocked “all lanes of traffic” at the intersection, according to information released by the department Wednesday morning.

Police said a “large fire” was started on North Lombard Street soon after the group arrived at the PPA building.

“Members of the group started vandalizing the Portland Police Association office with graffiti while others attempted to pull the plywood off of the doors and windows,” police further alleged.

Tuesday night’s events escalated even further. In one instance, just before 11:20 p.m., police said a truck dragged a motorcycle through the crowd that had amassed on North Lombard Street, although no one was struck.

Then, around 11:35 p.m., “the group had set up several barricades and fences along North Lombard Street,” police said. “The group continued to tamper with the doors in an effort to break into the Portland Police Association office and several fires were started in the streets and around the building.” 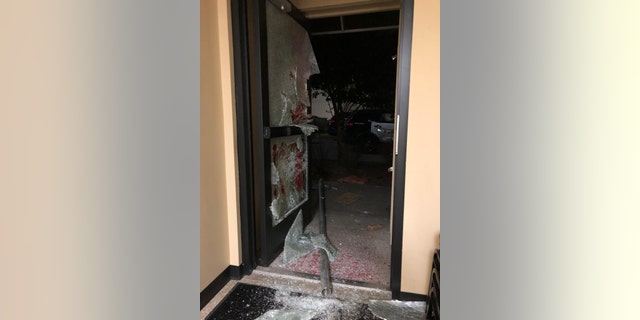 JOURNALIST DESCRIBES RIOT DAMAGE IN CITIES ACROSS US: ‘BEYOND ANYTHING … SINCE AT LEAST THE 1960S’

Early Wednesday morning, around 12:30 a.m., a fight led to gunfire just one block from the PPA office.

“No one was struck by gunfire and no one would speak to officers regarding the incident,” police said.

Shortly after, rioters forced their way into the police association’s office, where police said they damaged the property and “set fire to the building.”

The demonstrations and riots had largely come to a close by 3:30 a.m.

Police said several people have been arrested in connection with the events of Tuesday night into Wednesday morning, though additional details were not immediately available.

A different group gathered in downtown Portland for a largely peaceful, unrelated demonstration, police said. Despite instances of blocked traffic, authorities said they did “not interact” with the group.

The Oregon city has seen months of protests, which have recently devolved into riots, since the May 25 death of George Floyd, who died while in police custody. Tensions flared even further in July when President Trump deployed federal law enforcement agents to the city to protect a federal courthouse that had reportedly been vandalized and covered in graffiti.  A fence was also erected around the courthouse’s perimeter.

Local officials said they did not want the federal law enforcement presence, arguing it made the situation worse.

NYC gang member involved in 3 drive-by shootings after being released without bail in May: report