Seattle Mayor Jenny Durkan and Police Chief Carmen Best came out Tuesday against proposals to lay off as many as 100 police officers while under pressure to scale back the police force.

A plan unveiled last week by council members Lisa Herbold, Tammy Morales, Teresa Mosqueda and M. Lorena Gonzalez would include laying off 70 officers and 30 unplanned resignations. The move would trim the police department’s $409 million budget by $3 million if the reductions are carried out by November.

BLM PROTESTERS IN SEATTLE CLAIM IN SUIT THAT EXPENSIVE GEAR TO PROTECT THEM FROM COPS PRICES THEM OUT OF CIVIL RIGHTS: REPORT 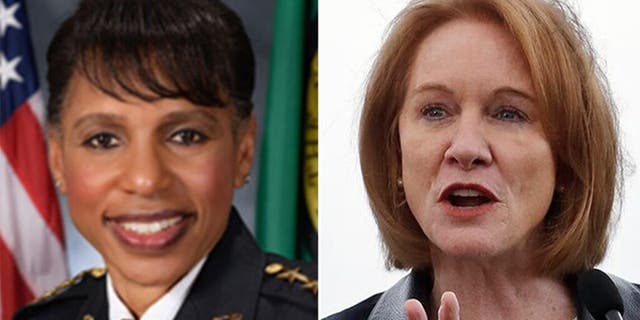 In a news conference, Durkan urged the council to hold off making substantial cuts until 2021, saying immediate reductions would be “ill-advised.”

“We think the council is looking in the right places, but in the wrong year,” she said.

Community coalitions are pressuring Seattle’s elected officials to reduce the police budget amid a national reckoning over police tactics.

“The push from council and some of our community is to do these large-scale changes in 2020 with no practical plan for community safety,” Best said Tuesday. “Council has directed me to lay off 70 or more officers basically overnight, and I cannot do that in good faith.”

Herbold countered the claims made by Durkan and Best, saying the proposals “are a modest reflection of our recognition of the calls from the community.”