The remaining federal agents stationed in Portland, Ore., will stop wearing military-style uniforms after calls intensified for federal forces to ditch the camouflage patterns and wear clothing that indicates they are law enforcement officers.

Acting Deputy Homeland Security Secretary Ken Cuccinelli addressed concerns during his Tuesday testimony before the Senate Judiciary Committee, saying the agents would transition from the uniforms.

“To address concerns about military-like appearance of some of Customs [and] Border Protection’s (CBP) officers’ uniforms, which are the normal uniforms used by some CBP teams in the course of regular duty, we are moving rapidly to replace those uniforms for those personnel,” he said. 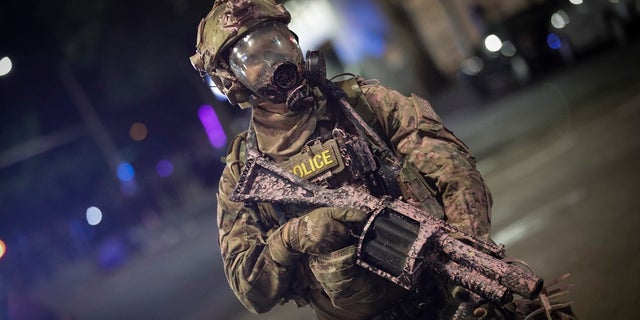 Federal agents have been stationed in Portland since June to protect a federal courthouse as nightly protests have raged and frequently turned violent. Federal officers and protesters have clashed outside the Mark O. Hatfield United States Courthouse in downtown Portland.

The building has frequently been targeted for vandalism and property destruction.

Images of videos of federal agents in military-style gear arresting protesters and whisking them away in unmarked vehicles prompted criticism and angered many transparency advocates.

Many were concerned that the agents were unidentifiable.

“They need to stop this charade and stop pretending they’re the military. They need to put their ICE [Immgraton and Customs Enforcement] uniforms and CBP uniforms back on,” Rep. Ruben Gallego, D-Ariz., a member of the House Armed Services Committee and a Marine Corps veteran who served in Iraq, told The Washington Post last month.

Calls and messages to DHS from Fox News were not returned.

Oregon Gov. Kate Brown, a Democrat, said last week that some federal officers would withdraw from the city after reaching an agreement with the Trump administration.

Cuomo calls on wealthy New Yorkers to come back to the city: 'I'll buy you a drink!'