Whipping winds from Tropical Storm Isaias brought down trees and knocked out power for millions along the East Coast on Tuesday, with hurricane-strong gusts blasting atop Mount Washington in New Hampshire.

At least six people were killed as Isaias spawned tornadoes and dumped rain along the East Coast after making landfall as a hurricane in North Carolina, where it caused floods and fires that displaced dozens of people.

“One of the most damaging storms the Northeast has ever experienced,” Fox News Senior Meteorologist Janice Dean said on “Fox & Friends First.”

Two people died when Isaias spun off a tornado that struck a North Carolina mobile home park. Another person died in Pennsylvania when their vehicle was overtaken by water and swept downstream. 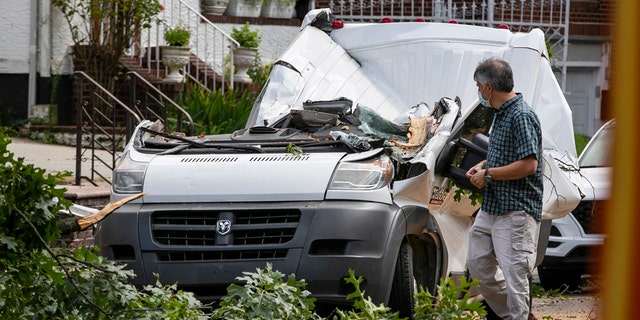 Two others were killed by falling trees toppled by the storm in Maryland and New York City, and a sixth person died in Delaware when a tree branch fell on them, authorities said.

Philadelphia firefighters driving through a flooded neighborhood in the aftermath of Tropical Storm Isaias on Tuesday. (AP Photo/Matt Slocum)

The National Weather Service (NWS) office in Gray, Maine, said that a peak wind gust of 147 mph was reported atop the New Hampshire peak as the storm roared northward.

“This is the highest wind gust reported there in the month of August,” the forecast office said.

The Mount Washington Observatory said on Facebook that the storm knocked out the main and secondary internet service.

Workers were still able to put up brief posts using a “single bar of service,” and said that winds were “moving back down.”

“We sincerely hope everyone was and is safe!” a worker wrote on Facebook.

While Isaias may have broken a record for the month of August with a gust equivalent to the strength of a Category 4-hurricane, the strongest wind gusts ever recorded at Mount Washington took place on April 12, 1934, when a 231-mph wind gust was observed.

Dozens of storm reports stretch from the Carolinas to New England after Tropical Storm Isaias roared through the area. (Fox News)

According to the observatory, the record was topped in 1996 but the gust in 1934 is still the highest surface wind speed ever observed by humans.

A much quieter day is on tap for Wednesday after Isaias caused a path of destruction.

The storm is now well into Canada becoming post-tropical on Tuesday night. Breezy conditions will continue across the Northeast and New England on Wednesday in the storm’s wake.

Some of the peak wind gusts from Tropical Storm Isaias. (Fox News)

The next few days should be quiet in the Atlantic basin as we get into what typically is the busiest time of year for hurricane season through the rest of August and into September.

A stalled front over the Mid-Atlantic and Southeast will bring the risk of showers and thunderstorms over the next few days.

Scattered storms will also be possible for parts of the Lower Mississippi Valley back through the southern and central Plains.

More dangerous heat is in the forecast for the West and Southwest on Tuesday. (Fox News)

The heat continues for the Southwest and southern Plains with temperatures at or above 100 degrees on Tuesday.

An elevated fire danger exists out west, as more hot weather is in the forecast. (Fox News)

An elevated risk for fire danger once again will be present for the Southwest into the Great Basin and Central Rockies.

Dry thunderstorms will also be a threat for potential wildfires over northern California up into the Northwest.

The Associated Press contributed to this article.