Nine named storms already in the books have broken records for the 2020 Atlantic hurricane season, but government forecasters said Thursday that even stormier conditions are on the horizon that could push the limit on traditional storm names.

The National Oceanic and Atmospheric Administration (NOAA) said in its updated hurricane season outlook that conditions exist for what could be one of the busiest on record.

“We’ve never forecast up to 25 named storms, so this is the first time,” said Gerry Bell, the lead hurricane forecaster at NOAA’s Climate Prediction Center.

2020 HURRICANE SEASON LABELED ‘EXTREMELY ACTIVE’ IN COLORADO STATE FORECAST, MAY BE BUSIEST SINCE YEAR OF KATRINA 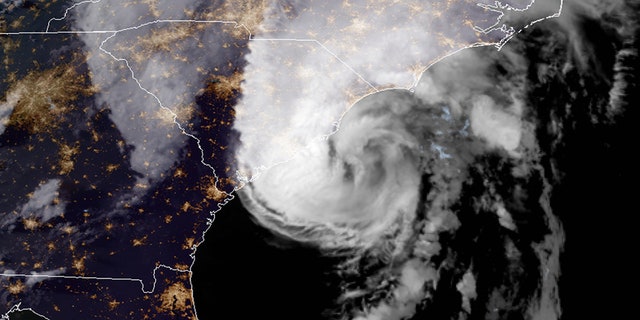 Hurricane Isaias is seen traveling up the East Coast earlier this week. (NOAA)

These numbers include the nine storms that have already formed, which were seven tropical storms and two hurricanes.

That’s far above an average year. Based on 1981 to 2010 data, that is 12 named storms, six hurricanes, and three major hurricanes.

Hurricane season has already been busy in 2020, but forecasters say it should get even nastier soon. The National Oceanic and Atmospheric Administration increased its forecast for the number of named storms, hurricanes and major hurricanes this year to far above normal. (AP Photo/Gerry Broome)

The updated forecast also increased the chance of an above-average hurricane season from 60% to 85%, more than the agency’s May forecast.

Forecasters said Thursday that current oceanic and atmospheric conditions are why an “extremely active” hurricane season is possible. The combination of warmer-than-average sea surface temperatures in the tropical Atlantic Ocean and the Caribbean Sea, reduced vertical wind shear, weaker tropical Atlantic trade winds, and an enhanced west African monsoon are behind the uptick.

The peak of hurricane season is approaching. (Fox News)

“It looks like this season could be one of the more active in the historical record,” Bell said during a briefing with reporters.

Bell added that besides increased numbers of storms, this hurricane season could feature strong and longer-lived storms than average. He said while the outlook may have its highest numbers ever, forecasters don’t believe this season will top the 28 named storms in 2005, which included Hurricane Katrina.

A stove with a pot still on a burner remains intact, while the rest of the mobile home was destroyed by a tornado, spawned by Hurricane Isaias, on Morning Road on Wednesday, August 5, 2020 in Bertie County, N.C. (Robert Willett/The News & Observer via AP))

But if 25 storms do end up forming in 2020, that could mean that there will be more storms than names.

There are 21 names assigned to a hurricane season. If there are more than 21 storms, meteorologists turn after Wilfred to the Greek alphabet — Alpha, Beta, Gamma and so on.

A look at the named storms so far for the 2020 Atlantic hurricane season. (Fox News)

Conditions then were “even more favorable,” Bell said, adding that by early August 2005 there had already been two major hurricanes.

“This will be the third active season we’ve had since 2005,” Uccellini said.

Forecasters noted that while 19 storms formed during the 2010 season, the U.S. was spared from many. So far in 2020, the most destructive has been this month’s Hurricane Isaias, which killed at least nine people and left millions of people without power.

Bell noted that in seasons with increased activity, storms tend to track further westward, which makes for an “increased threat” to the U.S. The NOAA projection does not account for landfalling storms, which, according to Bell, due to weather patterns are only known 5 to 7 days in advance.

A man walks past a damaged house with a chainsaw in the Riverview neighborhood of Suffolk, Va., after Hurricane Isaias moved through the region Tuesday, August 4, 2020. (Jonathon Gruenke/The Daily Press via AP)

Still, he stressed that now is the time for coastal and inland residents to get ready before more storms threaten, especially with consideration during the ongoing coronavirus pandemic.

Oak Island sustained wind and flood damage caused by Hurricane Isaias leaving the streets strewn with debris and covered with more than a foot of sand in areas close to the beach Tuesday, August 4, 2020, in North Carolina. (Travis Long/The News & Observer via AP)

“We know it takes only one storm to create catastrophic impacts,” he said.

U.S. Secretary of Commerce Wilbur Ross said in a statement that it was “one of the most active seasonal forecasts” that NOAA produced in its  22-year history of hurricane outlooks.

“We encourage all Americans to do their part by getting prepared, remaining vigilant, and being ready to take action when necessary,” Ross said.

The names for the 2020 Atlantic hurricane season.