House Bill 838 makes bias-motivated intimidation of first responders a crime. It would apply to anyone responsible in the death or serious bodily injury of a police officer, firefighter or emergency medical technician, and to anyone who causes damage of $500 or more to property owned by police and first responders.

The crime is punishable by up to five years in prison and a fine of up to $5,000. The measure says the sentence must be stacked atop any other related sentence, which could lead to long sentences for violations such as vandalism aimed at officers.

“During my time as Governor, I have attended the funerals of far too many law enforcement officers who were killed in the line of duty, Kemp said in a statement. “It’s absolutely heartbreaking, and we must act.

He called the legislation “a step forward as we work to protect those who are risking their lives to protect us. While some vilify, target and attack our men and women in uniform for personal or political gain, this legislation is a clear reminder that Georgia is a state that unapologetically backs the blue.” 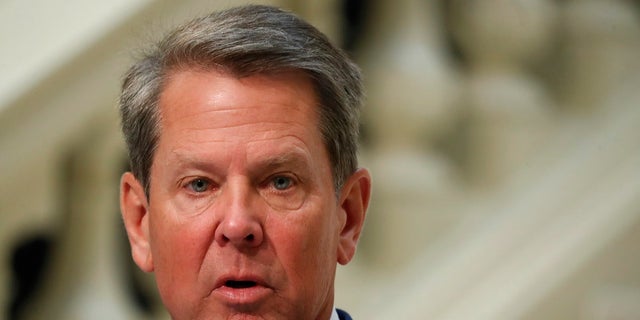 Georgia Gov. Brian Kemp speaks during a coronavirus briefing at the Capitol, in Atlanta. On Wednesday, Kemp signed into law a measure to give police officers and other first responders added protrctions. (AP Photo/John Bazemore, File)

The measure was added to a hate-crime bill that gained traction after the fatal shooting of Ahmaud Arbery, a Black man who was killed in Glynn County in what prosecutors called a racist attack in February.

Opponents of the law argued that police officers are already afforded strong protections under the law.

“HB 838 was hastily drafted as a direct swipe at Georgians participating in the Black Lives Matter protests who were asserting their constitutional rights,” said Andrea Young, executive director of the American Civil Liberties Union of Georgia.

The measure was passed by Republican lawmakers with almost no Democratic support.

NRA plans to spend ‘tens of millions’ in battleground states