California could be on track to release a total of 17,600 inmates since the start of the coronavirus pandemic by late August.

The California Department of Corrections and Rehabilitation (CDCR) estimated in July that 8,000 inmates could be eligible for release by the end of August, in addition to 10,000 inmates who have already been released.

“We’re glad the governor is taking action to release more people,” Californians for Safety and Justice Executive Director Jay Johnson said in a statement at the time. “This is absolutely critical for the health and safety of every Californian. Too many people are incarcerated for too long in facilities that spread poor health.”

The CDCR did not immediately respond to an inquiry from Fox News. 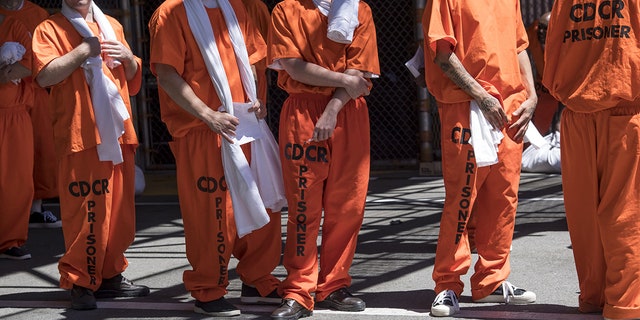 The first 3,500 inmates were freed in April to create space in crowded prisons and 6,900 more were deemed eligible for release in early July, totaling 10,4000 releases. Officials said other inmates would be eligible under different release programs but couldn’t provide an estimate.

In a filing last week with a federal judge who oversees one of the major lawsuits facing the prison system, officials increased the estimated total of releases from 10,400 to 17,600. However, prison officials say Corrections Secretary Ralph Diaz is likely to block the release of about 5,500, in part because many are serving life prison sentences.

Nearly 2,000 state prison system employees also have been infected with COVID-19 and eight have died. The latest, Sgt. Seeyengkee Ly, who worked at Valley State Prison in Chowchilla, died on Aug. 2 from pneumonia complications after contracting COVID-19.

Officials have been under intense pressure from advocates, some state lawmakers and two federal judges to release more inmates, particularly after a botched transfer of infected inmates into San Quentin State Prison led to the state’s worst prison outbreak. Nearly 170 inmates still are infected there and 23 died, including 11 on death row. More than 2,000 have either recovered or were released while infected.

City police departments across the country have altered their operations due to the pandemic, including arrests that require less contact and efforts to avoid prosecutions for people for low-level crimes to prevent jail overcrowding.

Nationwide, more than 100,000 people were released from state and federal prisons between March and June, a decrease of 8 percent, according to an analysis by The Marshall Project and The Associated Press.

Human rights activists prepare for a car caravan protest through Los Angeles to call on officials to release inmates from jails to prevent the spread of coronavirus on April 7, 2020. (ROBYN BECK/AFP via Getty Images)

California, New York, Ohio and Texas are among some of the first states that issued orders to release elderly and sick inmates home early, the Wall Street Journal reported in March.

California Police Chiefs Association president Eric Nuñez said he understands the urgency of reducing the prison population but is alarmed by the release of some violent criminals “without a consideration for the larger impact on public safety.” He said the chiefs want to work with prison officials on improving the decision-making process.

So far there have been two reported incidents in which inmates who were released early shot and killed two victims in Denver and Tampa, Florida.

Close-up on the insignia and slogan of an LAPD vehicle. (iStock)

Chicago, Lousiville, Kentucky, Detroit, Baltimore and Philadelphia have seen spikes in crime and shooting amid nationwide civil unrest that came on the tail of months-long lockdown restrictions and the officer-involved death of George Floyd on May 25. Among the countries 50 largest cities, homicides have increased 24 percent so far in 2020 to 3,612, according to The Wall Street Journal.

“It’s no surprise that when politicians insist on releasing violent felons into our communities, emptying our jails, refusing to require bond for persons charged with crimes, and all the while calling for the defunding or abolition of police, that violent crime goes through the roof,” Bill Johnson, executive director of the National Association of Police Organizations told Fox News.

He added that “more violent offenders on the street plus reduced law enforcement equals death and destruction in our communities.”