Thousands of Christians gathered outdoors in Portland on Saturday to sing spiritual music amid the state’s coronavirus social distancing measures—just hours before a riot was declared across town and a separate crowd lit fire to the city police union headquarters.

Worshippers met in Waterfront Park on Saturday evening for an event dubbed “Riots to Revival.” Controversial Christian musician Sean Feucht, who has hosted similar gatherings on California beaches amid COVID-19 restrictions, led the crowd in song and some were even baptized. Most people flouted social distancing and did not wear masks or facial coverings, KGW reported.

“I’m excited to share with you some good news from Portland. Last night, we gathered thousands of people that came together,” Feucht told “Fox & Friends Weekend” Sunday morning.

“White, Black, Hispanic – we came and released our song of hope over this city. People gave their life to Jesus. Hundreds of people — We baptized people in the river behind us. There was so much joy that took over the streets of that city last night.”

Feucht estimated between 4,000 and 7,000 people attended the massive outdoor church service that happened just blocks away from the federal courthouse and acted as a counter-protest to bring worship, prayer, and acts of kindness to Portland. Only 600 people responded to a Facebook event to say they would attend.

Videos showed a large, close-knit crowd of people with their arms raised in praise. The city has seen more than two months of violence in the wake of the death of George Floyd in Minneapolis on May 25.

“Our tagline last night was ‘Riots to Revival,’ which we’re carrying with us into Seattle tonight. We just believe that the church has the ability to change the narrative. All of America has just seen these buildings burning, and they’ve seen this destruction and this violence, and the mainstream media seems to be infatuated with this. But what I’m telling you is that there’s another story of what God is doing in these cities and the church is rising up,” Feucht told Fox News’ Pete Hegseth.

A worship leader and founder of “Hold the Line” ministries, Feucht has been hosting “Let Us Worship” protests across California to encourage Christians to become more involved in politics and fight against the “double standard” seen in coronavirus restrictions.

Under Oregon Gov. Kate Brown’s latest executive order, faith-based gatherings are capped at 50 people for both indoor and outdoor services and require sanitization and social distancing, according to the Multnomah County website.

About 5 miles away, a large crowd marched to the Portland Police Association office late Saturday, erected a fence, pushed dumpsters into the street to block traffic, set a dumpster on fire, vandalized the building with spray paint, and destroyed security cameras. The Portland Police Bureau declared a riot at 11:35 p.m. when people broke a window to gain access to the building and started a fire inside.

Officers with the Oregon State Police and Portland Police Bureau warned all people, including press and lawful observers, to disperse or be subject to arrest, citation, or impact munitions. Police said a “hostile crowd” threw glass bottles and paint balloons and shined green lasers at officers. Three officers were injured, two of whom were transported to the hospital and released. Several people were arrested.

Before the violence broke out, hundreds gathered at rallies across the city in Peninsula, Laurelhurst, and Berrydale parks. Gatherings this week have been noticeably smaller than the crowds of thousands who turned out nightly for about two weeks in July to protest the presence of federal agents sent by the Trump administration to protect the federal courthouse and other properties downtown.

Democratic leadership in the city and state blamed the Trump administration for escalating tensions, and federal agents left Portland last week after Homeland Security reached a deal with Oregon State Police. But protesters had clashed with the Portland Police Bureau for weeks prior when demonstrations reached the city first on May 29. 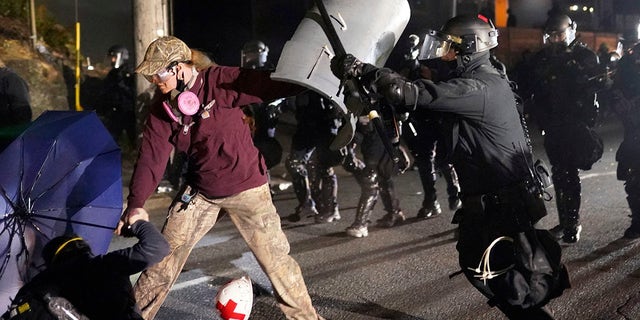 A Portland police officer shoves a protester as police try to disperse the crowd in front of the Multnomah County Sheriff’s Office early in the morning on Saturday, Aug. 8, 2020 in Portland, Ore. (AP Photo/Nathan Howard)

Last week, Mayor Ted Wheeler warned protesters against “attempting to commit murder” by continuing the violence after federal officers already left the city, claiming they would be just “creating B-roll film” to be used in President Trump’s reelection campaign ads.

“When you commit arson with an accelerant in an attempt to burn down a building that is occupied by people who you have intentionally trapped inside, you are not demonstrating, you are attempting to commit murder,” Wheeler said in a news conference Thursday with Portland Police Chief Chuck Lovell.

“Don’t think for a moment that if you are participating in this activity, you are not being a prop for the reelection campaign of Donald Trump — because you absolutely are,” he said. “You are creating the B-roll film that will be used in ads nationally to help Donald Trump during this campaign. If you don’t want to be part of that, then don’t show up.”

Florida officer feared for life before shooting, killing suspect who was choking her: sheriff