Chicago restricted downtown access by raising its bridges early Monday after a night of widespread looting and rioting that led to more the 100 people arrested and at least 13 police officers injured.

The unrest was prompted by a social media post urging people to converge on Chicago’s business district after police shot a man on the South Side around 2:30 p.m. Sunday. 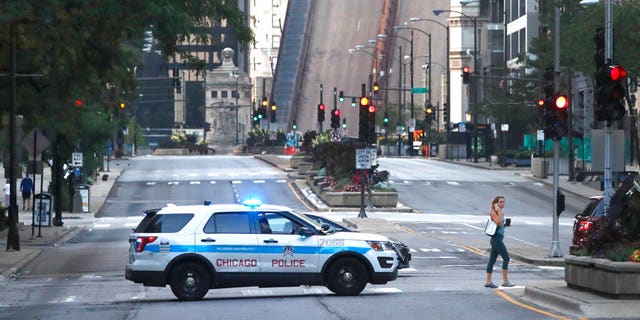 A pedestrian walks across Michigan Ave., Monday, Aug. 10, 2020, past a Chicago police department vehicle, a few blocks north of the raised Michigan Ave. bridge over the Chicago river after overnight vandalism in Chicago.  (AP)

Officers had been responding to a call about a person with a gun in the Englewood neighborhood and tried to confront someone matching the description in an alley. The man fled from officers on foot and shot at them, police said.

A video posted on Facebook around 6:30 p.m. falsely claimed that officers had shot and killed a 15-year-old boy. The video shows upset residents confronting officers near the scene where officers shot and wounded an adult suspect who they said had fired at them.

Around 12:20 a.m. Monday, hundreds of people descended on downtown Chicago, smashing the windows of businesses, and making off with merchandise, cash machines and whatever else they could carry, police said.

By morning, the city had raised its bridges across the Chicago River to prevent more unrest. Illinois state police had blocked off some expressway ramps into downtown, while CTA had suspended train and bus services. Access was restored later in the day.

Chicago police officers are reflected in a broken window as they gather, Monday, Aug. 10, 2020, outside an Apple Store that was vandalized overnight in the Lincoln Park neighborhood in Chicago.  (AP)

A similar plan was put in place earlier in the summer, following widespread unrest prompted by the police custody death of George Floyd in Minneapolis in late May.

Brown said a heavy police presence will be in downtown Chicago Monday, with officers working 12-hours shifts and no days off “until further notice.”

Brown said the suspect shot by officers had a long criminal history, including arrests for domestic battery and child endangerment. He said a gun was recovered at the scene.

New York woman, 25, falls to her death while rock climbing