When Hurricane Isaias made landfall last Monday and then roared up the East Coast with powerful winds and heavy rain, the storm also generated dozens of tornadoes.

The National Weather Service (NWS) Eastern Region said Friday that at least 36 tornadoes are confirmed to have been whirled up by Isaias from North Carolina all the way to Connecticut.

According to the NWS, the tornadoes included an EF3 in North Carolina that killed two people, six EF2s, 17 EF1s, and 11 EF0s.

North Carolina saw the most tornadoes with 12 confirmed, following by eight twisters in Maryland, seven in Virginia, two in Delaware, Pennsylvania, and New Jersey, with one each in South Carolina and Connecticut.

“The 29.2 mile tornado path across Kent and New Castle counties is the longest tornado track ever recorded in Delaware,” the NWS noted.

The NWS forecast office in Mount Holly, N.J., noted the 29.2 miles “blasts away” the state’s previous record tornado length that happened in 1988.

Of the three dozen tornadoes triggered by the storm, only one was deadly. 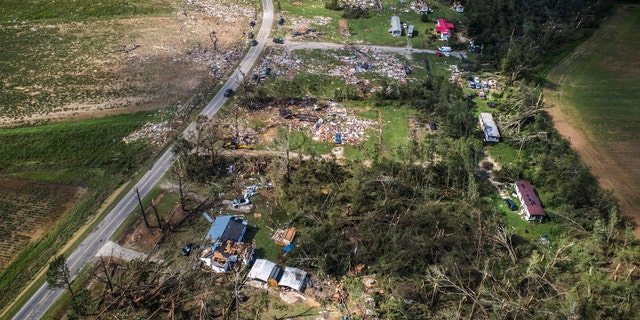 A view from a drone shows the destruction at a mobile home park near Windsor, N.C., that was hit by a tornado spawned by Isaias, Tuesday, Aug. 4, 2020. Two people were killed. (Julia Wall/The News & Observer via AP)

That twister struck the town of Windsor with winds of 145 mph, leaving behind a field of debris and splintered wreckage in a mobile home park where two people were killed.

“It doesn’t look real; it looks like something on TV. Nothing is there,” Bertie County Sheriff John Holley told reporters, saying 10 mobile homes had been destroyed. “All my officers are down there at this time. Pretty much the entire trailer park is gone.”

Cynthia Cooper looks for personal items for a family member who had their home destroyed after a tornado spawned by Hurricane Isaias destroyed a rural mobile home neighborhood killing two residents near Windsor N.C. on Wednesday, Aug. 5, 2020. (Robert Willett/The News & Observer via AP)

A total of 14 people were injured in that twister.

Homeowner Brenda Wilson, right, shows Cally Edwards of the American Red Cross the damage to the rear of her home on Woodard Road in rural Bertie County on Tuesday, August 4, 2020 near Windsor, N.C. (Robert Willett/The News & Observer via AP)

“We mourn the loss of life here; we also are thinking about the families who are hospitalized,” North Carolina Gov. Roy Cooper said during a tour of the damage in Bertie County.

According to the National Oceanic and Atmospheric Administration (NOAA), almost all tropical cyclones making landfall in the U.S. spawn at least one tornado.

These tornados can develop very quickly and can form in thunderstorms located in the outer bands of the storms that spin as they move over land.

Historical records show that the most intense tornado outbreaks linked to tropical cyclones are along the Gulf Coast and the Atlantic Coast from Virginia southward.

The biggest outbreak on record happened in 2004 when Hurricane Ivan produced more than 118 tornadoes from Florida to Pennsylvania.

Isaias killed 9 people and left millions without power as it moved northward as the ninth named tropical system of the season.

The updated forecast covers the entire six-month hurricane season, which ends Nov. 30, and includes the nine named storms to date.

3 US citizens arrested in California for trying to smuggle in 52 illegal immigrants: officials