A birthday party in Minnesota got an electrifying surprise on Saturday, when the park shelter were dozens of people were celebrating was struck by lightning.

The incident happened just before 5:30 p.m. at Casperson Park in Lakeville, located south of Minneapolis/St. Paul, as severe thunderstorm moved through the area.

The Lakeville Police Department said 40 people were attending a birthday party inside the shelter when the structure was hit by lightning.

A photo posted by police on Twitter shows a large hole left in the roof after the strike. 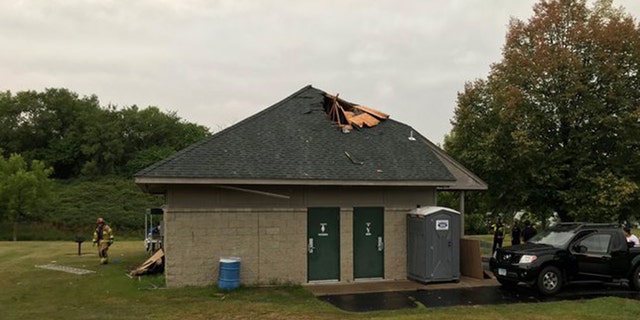 Damage to a park shelter after a lightning strike on Saturday in Lakeville, Minn. (Lakeville Police Department)

Police told FOX9 that the strike went through the roof to the concrete.

A resident who lives near the park posted an image of what he believes was the strike that was caught on his Nest camera.

Beau Moser, who left the park as the storm came in and witnessed the strike, told KSTP it was “pretty powerful.”

“I seen the big flash out of the corner of my eye, and all of a sudden, about five seconds later we heard the boom and the crack,” he said.

Police said that no one was seriously hurt in the incident. Three people were checked out for injuries, but no one was transported to the hospital.

Officials told FOX9 that one person had suffered a minor burn, while others sustained injuries from debris and the impact of the strike.

“They were just over there, a big family doing their thing,” Moser told KSTP-TV. “I didn’t think anything that catastrophic would be that close.”

John Jensenius, a lightning safety specialist at the National Lightning Safety Council (NLSC), told Fox News in June the best place to be when a thunderstorm is happening is in a substantial building with four walls, wiring and plumbing. That’s because if it’s struck by lightning, the electric charge will follow the plumbing and wiring to the ground.

“That keeps you safe, if you aren’t in contact with wiring or plumbing,” he said.

Staying away from windows, doors and doorknobs to the outside, as well as avoiding taking showers or baths when lightning is around, is also key to avoiding a dangerous situation.

So far in 2020 there have been 12 lightning fatalities in the U.S., according to the National Weather Service.

A 9-year-old girl in Georgia was struck and killed by lightning in July while she was in a wooden shelter near a tree.