A police officer in Florida learned last week it pays off to wait after he nearly missed being hit by a lightning strike.

Martin County Sheriff’s Office Deputy John Barca said he was sitting in his truck last Wednesday in Palm City when he paused for a few seconds before getting out.

“All in one big, flash, boom, bang and then it started raining asphalt on my truck and I’m like what the heck just happened,” he told FOX29.

The sheriff’s office said on Twitter that lightning struck the asphalt next to Barca’s truck, burning the tires and disabling the entire vehicle. 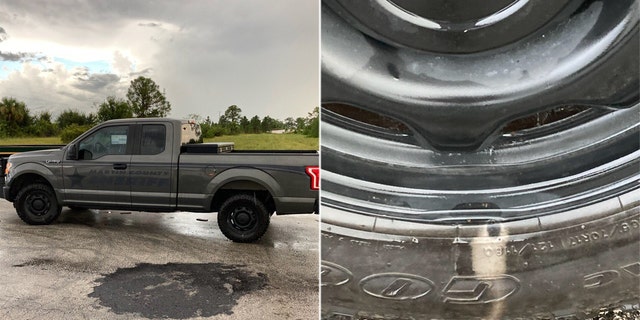 “Detective was inside the vehicle when the strike occurred making the ground so hot, the water around the vehicle was bubbling,” the sheriff’s office said.

Barca, a detective with the Sheriff’s Office’s Agricultural Environmental Crimes Unit, said the bolt struck just 4 feet from his vehicle.

He told FOX29 that when he stepped outside, the asphalt was still bubbling.

“It was still warm and when I got out you could still see the bubbles from the asphalt where the water and moisture was still underneath,” he said.

The state of Florida has the greatest number of lightning deaths, with 47 lightning fatalities recorded from 2010 to 2019.

Between 2006 and 2019, a review of some 418 fatal lightning strikes found that 62 percent of the deaths were linked to leisure activities.

John Jensenius, a lightning safety specialist with the National Lightning Safety Council (NLSC), told Fox News that a common misconception about lightning safety is that rubber protects someone from lightning, since being in a vehicle during a thunderstorm is safer than being outside. But according to Jensenius, that’s due to a hard-topped metal vehicle and its metal shell being able to distribute the electric charge if it’s struck.

People also misjudge their distance from approaching storms, thinking that the lightning rise may be much farther away than it actually is.

“They are in danger as soon as they hear a distant rumble of thunder,” he said.