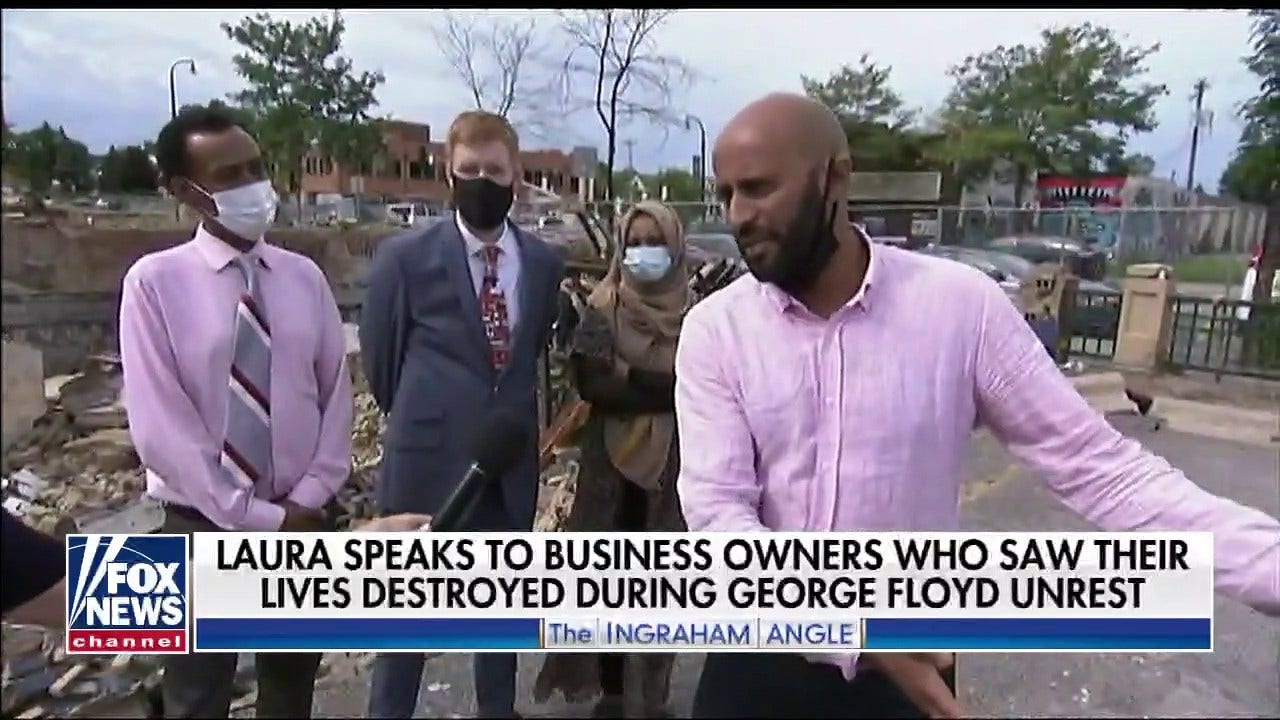 A Minneapolis man, whose business was burned down during riots in the city sparked by the death of George Floyd, told Fox News host Laura Ingraham on Monday that city officials said they would help business owners rebuild, but have not delivered on that promise.

Ibrahim Demaag, who immigrated from Ethiopia 30 years ago to pursue the American dream, said during an interview on the “Ingraham Angle” that the city sent him a $3,700 bill to pay for a fence surrounding his business, which was burned down by rioters.

“Enough is enough, guys,” he continued. “Let’s rebuild this community and stand by us.”

Standing next to the rubble left after his business was burned down by vigilante protesters weeks ago, Demaag, who owned Chicago Furniture Warehouse on Lake Street, told Ingraham he’s still waiting for local elected officials to respond to his calls for help.

“We left our country for a future to see the American dream and look how it happened,” Demaag told Ingraham.

“You work hard. You pay our taxes. We have not done anything wrong,” he continued. “The peaceful protests [were] hijacked [by rioters], then the government said, ‘Oh we’re going to back [you] up and build your neighborhood.’ Where? Where is the safety? Where is the rebuilding? It’s been 10 weeks. No response. No response.”

City officials did not immediately respond to Fox News’ request for comment.

Demaag was one of three Minneapolis business owners Ingraham spoke with on camera standing next to rubble left after an entire block was burned down by protesters.

Kacey White, the owner of the historic restaurant Town Talk Diner & Gastropub, said her restaurant was burned down three days before it was set to reopen for outdoor service after months of being closed due to coronavirus.

Chaos broke out in many cities across the nation over the death of Floyd while in Minneapolis police custody. Video showed police officer Derek Chauvin holding his knee on Floyd’s neck for more than eight minutes.

“How do you justify burning down someone’s business? You don’t realize how many people have been put out of work from all of this,” White told Ingraham.

She said when she saw “the police station go up in flames” and then a liquor store, she woke up her husband and told him their business “is going to burn down any minute.”

“And we sat there and watched it just melt to the ground, all of our hard work,” White said.

John Wolf, the owner of Chicago-Lake Liquors in Minneapolis, told Ingraham that looters ransacked his store and then burned it down.

“It started with people with bats entering, people pushing on the front windows, and then hundreds of people went in and they looted and that went on for one hour, two hours, five hours and then they came back the next night, and then the next night,” Wolf said.

He explained that looters filled up shopping carts with his merchandise.

When Ingraham asked how much the merchandise was worth, Wolf said “close to a million dollars.”

“More importantly than that, it’s now taken 40 plus jobs away from the people … who live, shop and work in this neighborhood,” he continued. “What happens to these families now?”