A New Jersey man was arrested on Friday after he spit blood at an officer, caused two car accidents and attempted to sexually assault a woman during a rampage that left a cop and three others injured, according to authorities.

Andrew M. Tolbert, 23, was charged with over two dozen offenses following the mayhem that began on Friday morning when he stole a neighbors Ford pickup truck and drove the wrong way down a Glassboro street, causing an accident involving two other vehicles. During the crash, one of the cars — a 2016 Honda Pilot — overturned and trapped the injured driver, police said.

“Tolbert exited the Ford F150 and attempted to take a GMC Yukon from a female driver that had stopped for the crash,” The Glassboro Police Department wrote on Facebook. “However she was able to lock him out of the vehicle. Tolbert then entered a 2006 BMW that was left unattended when the driver exited to assist those involved in the crash.”

The BMW owner said that he tried to stop Tolbert from taking his car when “Andrew smirked at him and proceeded to pull a U-turn and flee the area,” NJ.com reported, citing an affidavit of probable cause filed by police.

While officers and emergency personnel were attending to the crash scene, Tolbert walked into a rehabilitation center where he exposed himself to a female health worker, police said. Authorities said that he tried to push the worker into a closed office area before attempting to sexually assault her. At least two patients would come to the employee’s aid, forcing him out of the facility, according to authorities.

Tolbert then allegedly attempted to break into a locked neighboring building that was full of patients who had been ushered out of the rehabilitation center. He caused “significant damage” to the doors, police said.

When police arrived, Tolbert hopped in the BMW once again and took off, slamming it into Officer Darien Martinez who had just exited his vehicle, authorities said.

“Tolbert purposely drove the BMW into Ptl. Martinez, pinning him between the door and the vehicle, police said. “Tolbert then fled in the vehicle south on Main Street.”

The officer was taken to the hospital for a rib injury and released, the paper reported.

A subsequent chase saw officers pursue Tolbert who drove through a split-rail fence before he collided head-on with a 2005 Ford Escape, overturning his BMW and causing the passenger of the Escape to be ejected from the vehicle, police said.

“After the crash, Tolbert refused to exit the BMW where several less-than-lethal options were used [to] effect his arrest, which included OC spray, K9 deployment, and [a] taser,” police said. 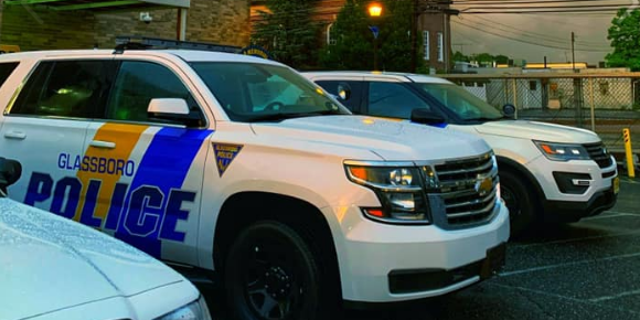 Andrew M. Tolbert, 23, was charged with 27 offenses following the mayhem that began on Friday morning when he stole a neighbors Ford pickup truck and drove the wrong way down a Glassboro street, police said. (Glassboro Police Department)

As he was being taken to an ambulance, Tolbert “purposely spit blood into the face” of another officer who was transported to the hospital and treated for blood exposure, according to the department.

The 40-year-old Honda Pilot driver suffered minor injuries, while the 63-year-old driver and 27-year-old passenger from the Escort suffered moderate injuries. They were all treated and released from Cooper University Hospital in Camden.

Tolbert was taken to the same hospital where he was treated for minor injuries before being released into police custody.

He was booked in the Salem County Jail and faces 27 charges, according to jail records. They include multiple counts of assault, theft, resisting arrest, attempted aggravated sexual assault, criminal sexual contact, and lewdness, police said.

Glassboro is located about 25 miles south of Philadelphia.

New York, San Francisco may not rebound after pandemic exodus, other factors: column