A New Jersey mom is upset after her son, who has autism and is nonverbal, was kicked out of a Catholic church by a priest for being a “distraction” during a private baptism ceremony.

Julia Vicidomini told Fox News she is still waiting for a personal apology after the priest at Christ the King Church in Hillside doubled down on why he decided to boot their son, Nicky, out of her baby daughter Sophia’s baptism.

“Yes, he was playing with a toy where he should not have been, however, the way the priest kicked him out of the church was completely rude and disrespectful,” she wrote on Facebook Sunday with a video of the incident. 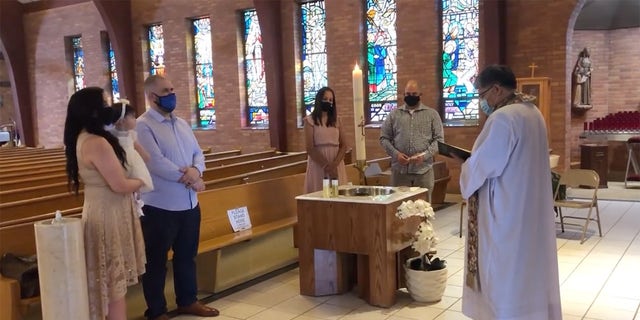 “I was told it would, in fact, be a private celebration for just our family, no one else,” Vicidomini explained. “With this information, I felt more comfortable taking Nicky as he doesn’t do well with a full Mass and large group settings.”

Vicidomini and her husband, Marc, have decided to leave the church where she grew up and went to Catholic school across the street after discussing the incident with the priest.

“My husband told him that he thought a priest, of all people, would be more sympathetic to a child with special needs, that he was completely unprofessional and ruined our celebration. He told him our family deserved an apology,” Vicidomini wrote. “The priest came outside to speak to our family but instead of apologizing he began to try to justify the reason he kicked our child out, again saying he was distracting him.”

The Archdiocese of Newark, in a public statement, apologized for the incident.

“On behalf of the parish and the Archdiocese of Newark, we offer our heartfelt apologies for the abrupt behavior demonstrated by one of our pastors on Saturday during a private family ceremony,” read the statement obtained by WABC. “The pastor was unaware that the sibling playing in a nearby candle room during the ceremony has autism.”

“The pastor did not understand the child’s behavior, he felt unprepared to respond appropriately, and his reaction to the situation was not pastoral. He acknowledges and is regretful for the mistake,” it continued. “Our Archdiocesan Office for Pastoral Ministry with Persons with Disabilities was in touch with the family to support healing and moving forward together, and we are working with all to come to a pastoral resolution and to ensure that there is greater awareness in working with individuals with disabilities and their families.”

The couple said they appreciate the apology from the archdiocese but “are still waiting for a personal apology from Father Luke.”

Son of NYPD's head of counterterrorism robbed near Central Park