These whipping winds were well over the posted speed limit.

An Iowa state trooper on Monday captured winds topping 90 mph as a derecho blasted across the state, flipping over vehicles and damaging thousands of acres of crops.

Officials said Sgt. Trainor had stopped under a bridge along Highway 30 in Cedar Rapids as the worst of the storm came through Linn County.

WHAT DOES DERECHO MEAN? WHAT TO KNOW ABOUT THE LONG-LIVED AND DAMAGING THUNDERSTORMS

Video posted to Twitter showed speeds recorded well over 70 mph as the swirling winds could be heard.

“Any guesses on what speed the radar would have picked up if he was on TOP of that bridge?” police said. 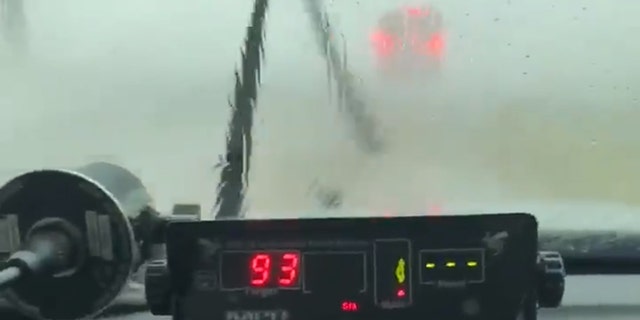 An Iowa state trooper on Monday captured on radar winds topping 90 mph as a derecho blasted across the state. (Iowa State Patrol)

The storm known as a derecho tore from eastern Nebraska across Iowa and parts of Wisconsin and Illinois, leaving behind a swath of destruction over its nearly 800-mile trek. A woman in Indiana was found dead clutching her grandson in her crushed mobile home.

Wind gusts were clocked at more than 100 mph as the storm system reached Des Moines.

A grain elevator in Luther, Iowa, collapsed from the intense winds of a derecho on Monday, Aug. 10, 2020. (@MONASTiCNiCK via Storyful)

That would be nearly a third of the roughly 31 million acres (12.5 million hectares) of land farmed in the state.

The most significant damage is to the corn crop, which is in the advanced stages of development nearly a month away from the beginning of harvest.

“This morning I had a farmer reach out to me to say this was the worst wind damage to crops and farm buildings that he has ever seen across the state in such a wide area,” Reynolds said.

Downed trees and a utility pole in front of the home of Tim and Patricia Terres in Walcott, Iowa after high winds and heavy rain passed through the area Monday, Aug. 10, 2020, in Davenport, Iowa. (Kevin E. Schmidt/Quad City Times via AP)

Iowa officials reported roofs torn off homes and buildings, vehicles blown off roads and hit by trees, and people hurt by flying debris. One death and dozens of injuries were reported in the state.

A 63-year-old bicyclist died after he was struck by one of several large trees that fell Monday on a bike trail outside of Cedar Rapids near Ely, the Linn County sheriff’s office said. Thomas Rowland of Solon, Iowa, suffered extensive injuries and died at the scene, the office said.

President Trump tweeted Tuesday night he was “sad to see” the damage from the derecho in the Midwest.

“112 mile per hour winds in Midway, Iowa! The Federal government is in close coordination with State officials,” the president said. “We are with you all the way – Stay safe and strong!”