A rally by the far-right Proud Boys in Portland, Ore., is expected to draw thousands of supporters and counterprotesters Saturday.

With the city bracing for violent clashes, Gov. Kate Brown declared a state of emergency Friday and agreed to send in troopers to help local police, according to the Statesman Journal,.

The Proud Boys, designated a hate group by the Southern Poverty Law Center, has described the rally as a “free speech” event to support President Trump and police, restore law and order and condemn “violent gangs of rioting felons.” 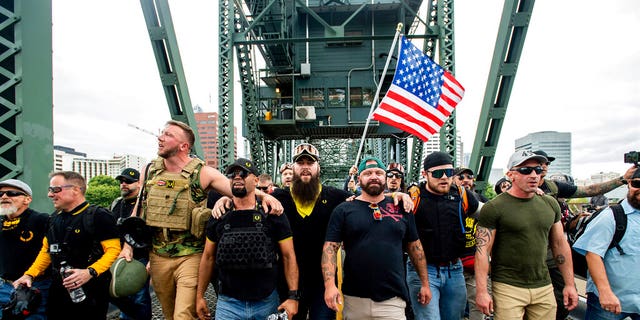 Members of the Proud Boys and other right-wing demonstrators march across the Hawthorne Bridge during a rally in Portland, Ore. (AP Photo/Noah Berger, File)

“As we head into the weekend, we are aware that white supremacist groups from out of town, including the Proud Boys, are planning a rally on Saturday in Portland,” Brown, a Democrat, said in a statement. “Significant crowds of people are expected to join — some people will be armed, with others ready to harass or intimidate Oregonians. Many are from out of state.”

She added that while Americans have the right to peacefully assemble, “these types of demonstrations in the past have often ended in fistfights, and sometimes escalated to bloodshed.”

“The First Amendment does not give anyone license to hurt or kill someone because of opposing political views,” the governor said.

“The Proud Boys and Patriot Prayer groups have come time and time again looking for a fight, and the results are always tragic. Let me be perfectly clear: We will not tolerate any type of violence this weekend,” she added. “Left, right or center, violence is never a path towards meaningful change.”

Portland Mayor Ted Wheeler, also a Democrat, said the city will “use every available power and resource … to protect free speech and our community from violence.”

The Proud Boys have held multiple events in Portland since Trump’s election, alongside other right-wing groups such as Patriot Prayer. The gatherings have sparked some violent clashes with left-wing counter-demonstrators.

People hold candles during a vigil in Vancouver, Wash., for Aaron “Jay” Danielson, a supporter of Patriot Prayer who was shot and killed in Portland, Ore. (AP Photo/Paula Bronstein, File)

A man suspected of fatally shooting a Patriot Prayer supporter, Aaron “Jay” Danielson, after a pro-Trump caravan in Portland last month had described himself in a social media post as “100% ANTIFA.” Federal agents later shot and killed the suspect, Michael Forest Reinoehl, in Washington state.

In an interview with Vice published the day he was killed, Reinoehl said he was acting in self-defense when he shot Danielson in the chest.

The Proud Boys mentioned the death of Danielson, a Trump supporter, in their permit application, as well as Kyle Rittenhouse, the 17-year-old charged in the shooting deaths of two protesters in Kenosha, Wisc.

The body of Michael Reinoehl is lifted onto a stretcher in the early morning hours of Friday, Sept. 4, 2020, in Lacey, Wash. (AP Photo/Ted S. Warren)

Rittenhouse’s attorneys have said he was acting in self-defense.

The Proud Boys raised the specter of a vigilante response to the actions of a “mob” in a permit application filed with the city this week.

Shootings have also escalated. The Portland Police Bureau released gun violence statistics on Sept. 4 that showed there have been more than 480 shootings as of Sept. 3 compared to 299 shootings for all of 2019.

Authorities said in July that downtown Portland businesses have sustained an estimated $23 million in damages due to rioting.